Indeed a “Witch Tip,” but also wise words all around…

Always, always, ALWAYS trust your intuition – the “gut” is the best read of any situation you will ever have (and, you were born with it)!  And our intention will lay out the path before us – remember the phrase “be careful what you wish for,” because that is exactly what this is.  Be ultra clear with what you want, leaving a little wiggle room for the unique possibilities the Universe may see (that you do not…yet).  And trust that inner guide, for it shall ever steer you in your best direction. 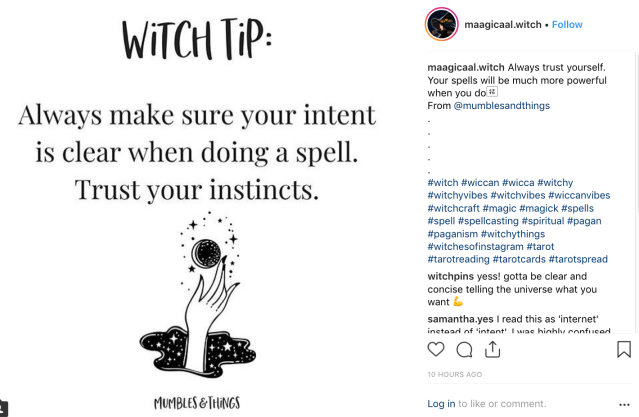 Can you manifest your dreams?  Try the above and watch the magic unfold…

Don’t make excuses.  Don’t justify, internalize, or minimize. That “feeling” you have – great, bad, or otherwise?  It’s dead on.

That elusive, evolutionary mechanism residing within your center – brimming over with feeling, and yet altogether “emotionless”. . . That space JUST KNOWS. Humans may indeed be flawed and fragile, but we have been designed – by whomsoever you chose – to survive against the odds.  Our “gut” tells us when things may be tipping in our favor, and when they might go awry (there actually IS a sabretooth hovering in that bush behind you.  RUN.)

Modern life has someone drowned to reflex, but it hasn’t gone anywhere.  No, it’s still there, jumping up and down with red flags a-flying trying to tell you that guy isn’t good for you on any level…that the job relocation actually IS what you need…or that maybe you need to rest today instead of pushing yourself to the point of immune shutdown.

These days life is fast-paced and all-consuming – here I am typing these words, with a cell phone plugged in next to me, texts coming through…and three other windows open, one of which is e-mail.  What happened to the “down time” of old?  What happened to actually FEELING and be aware of our own physiologic sensations?  Technology?  Maybe… It’s certainly sped up the planet to a spin that’s hard to keep up with – forget about time for a coffee, let alone having a moment to catch your breath and re-calibrate with your gut. Meditation?  What’s that?

Still…despite the onslaught of time-robbing “stuff,” the intuition is ever at the ready to guide you.  That split second flutter you feel is trying to tell you something.  So even if life has gone on warp speed…take a moment to LISTEN.  As best you can.  You don’t have to take a five-minute time out…just take a breath and listen to what your body, gut, and intuition is saying.  It’s got your back 1,000% – think of it as your personal, built-in radar, programmed to keep you alive and well.

And if you are one of those people who ARE aware but choose to ignore it?  Do a little test and listen next time… Making excuses or turning our cheek the other way?  It only hurts us in the end.

I do believe that things happen for reasons – many of the lessons I had to learn stemmed from deliberately overriding my gut (consciously and unconsciously.)  Neither, I suppose, is the better teacher – one just happens to be a lot less painful.  Especially after the fact when that flutter says – in the deep recesses of silence at night – “I told you so.”