There is no contesting that an individual set firmly in his or her ways (and honestly, who isn’t after the age of 2!?), will not embrace change unless he or she chooses to. To change requires a process of self-reflection, of acceptance, and of a willingness to walk a new path – but looking in the mirror and choosing to face the truth of what we see isn’t always so easy. We are likely our harshest critic, and also at times guilty of self-delusion…so facing ourselves head on can be a frightening prospect! In this way, admitting that we even NEED a change can prove a challenge, forget someone else insisting we make one.

It may be that we want to address something small, such as a relatively benign habit (hitting the snooze button more than we’d like to, leaving dishes around, getting sucked into social media until 2am…) or something more significant (wanting to alter a life habit or behavior that no longer serves us.) Whatever it is, those decisions begin internally – when we are ready, willing, and would like a change, that’s when change becomes possible. It will take work, but opening the door begins within.

All that said…planting a seed ought not be abandoned as an exercise in futility! While we may be resistant at first, there is always room to grow. Criticism is tough to handle for most of us – we have an innate need to belong (refer to Maslow for one theory) and therefore also to impress on some level. Most of us aren’t proud of our quirks or common foibles, and when they are engrained over the duration of our lives, they’re much harder to uproot. But, it can be done…and sometimes the repeated lessons or directions helps.

For example, there are things that I have done much of my life that just aren’t helpful any longer. I know they are habits born of some challenging times in my life – they served, at that time, as a way to cope and survive. So once upon a time, perhaps shutting down served me well – it protected me in that moment. But a deer-in-the-headlights way of operating doesn’t work when communication is required…so, I’ve been working on it. Finding one’s voice is a daunting task, especially when you weren’t really aware you had lost it, when you had lost it, or how the hell to get it back!

For another thing, I’ve identified with, and hinged my worth on brightening others’ days, diffusing or patching fights between people, and putting others first. For a long time I thought that was a really noble quality – I sincerely wanted to fix people’s hardships and be as little of a burden as possible. But…I’ve learned that there are some not great byproducts of that. It isn’t my right or responsibility to help, fix, or otherwise brighten someone’s existence – maybe they don’t damn well want me to! (That was an immensely tough realization for me, though I’ve learned that not taking this on provides me a great deal of freedom.) And not wanting to be in the way can translate to indecisiveness or a selfless approach that leaves someone else wondering what I feel internally.

If it wasn’t pointed out, I suppose I’d just continue along as always – because why fix what isn’t really “broken?” Learning that perhaps my methods of operating aren’t serving me as well anymore, or those around me, that I don’t need certain defenses, that it’s okay to be selfish and forthright has had a positive impact. That doesn’t mean that I’m suddenly rid of habits – I have to work really hard to overcome conditioning (just as we all do!) But it means I have awareness – the seed was planted a while ago, I’ve allowed it to bloom taking the time it needs, and I’ve reached a point where I am able to see that change is possible. And, that I want it.

So the point is that maybe a behavior or attitude we carry with us worked in past situations – maybe it was a way that we coped, or got things accomplished, or even the reason we survived in the end. But it’s possible that those methods would do well with a shift – time marches on, life changes, the people and places in our lives change… We don’t always need the same tools. If we are willing and able to take a hard look in the mirror, we may find ourselves opening to change and working for it. In some cases, though, we just aren’t ready. Criticism and constructive commentary may need to take place for some time… Maybe we need to hear the message a million times before we can really make sense of it…and only then are we ready to acknowledge a change would serve us well.

It takes time… We aren’t always open to altering ourselves – we’ve managed well enough as long as we’ve been around, right?! But the positive seeds others plant aren’t in vain because we may yet come to a fork in the road when suddenly those seeds find a way to flourish.

So remember that it’s hard enough to change oneself – asking that of someone who isn’t ready for the message may well fall on deaf ears. Maybe even rightfully so. But…if it’s a message that might bring about positive change for that person, don’t give up on planting the idea. It may take time for that seed to find the daylight, but in time it may grow into something spectacular. 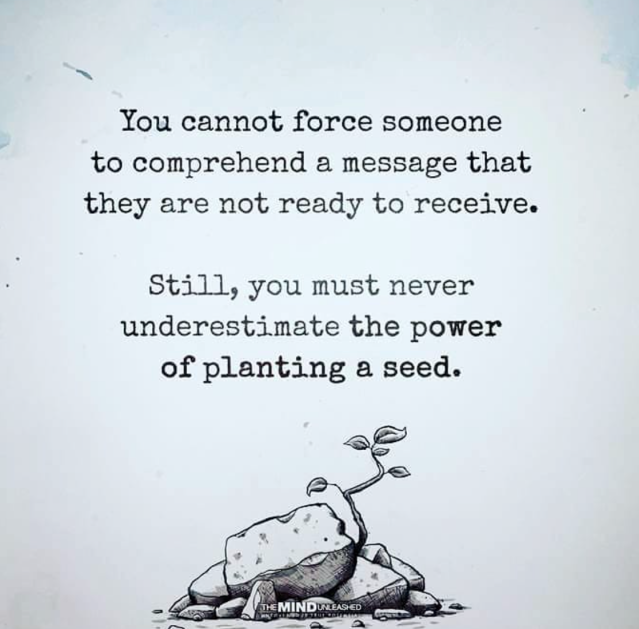